Introduced by Paula Johnson, Prize Administrator, the Society of Authors
Prizes presented by judges of the prizes, with readings by the winning translators

Following the readings Adam Mars-Jones will be in conversation with A.L.Kennedy

The award ceremony is hosted by the Society of Authors

With Readings from The Book of the Sultan's Seal, and Q&A, Reception and Book signing

• This is a free event, but please reserve your place by emailing piccadilly@waterstones.com. 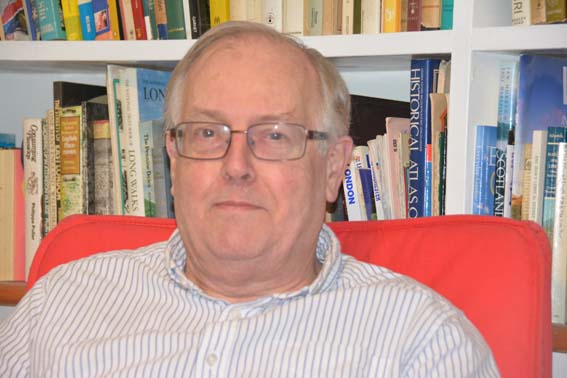 The 2015 Saif Ghobash Banipal Prize for Arabic Literary Translation is awarded to Paul Starkey for his translation of the novel The Book of the Sultan's Seal: Strange Incidents from History in the City of Mars by Youssef Rakha, published by Interlink Books.

Jonathan Wright is commended for his translation of Land of No Rain by Amjad Nasser, published by Bloomsbury Qatar Foundation Publishing.

The four judges were Robin Ostle (Chair), Emeritus Research Fellow at St John's College, Oxford; Samira Kawar, literary translator; Alastair Niven, lecturer and writer; and Susannah Tarbush, cultural journalist and blogger. They made their decision, reported below, on 17 December 2015 at a meeting at the offices of the Society of Authors convened by Paula Johnson, the Administrator of the Translation Prizes. Twenty-nine entries were received for the 2015 prize (26 novels and 3 collections of poetry). This is the highest number of entries in the history of the prize.

Paul Starkey for his translation of the novel The Book of the Sultan's Seal: Strange Incidents from History in the City of Mars by Youssef Rakha 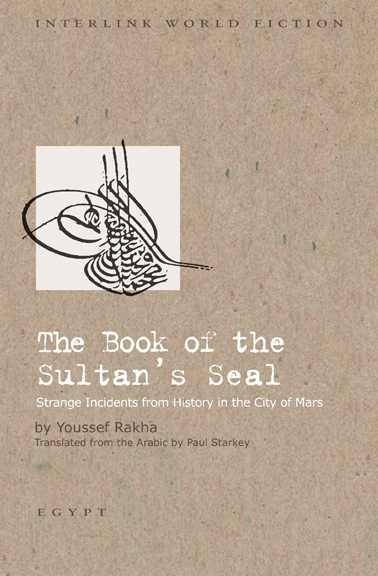 "Published at the height of the Egyptian Revolution in 2011, this is one of the most adventurous and innovative novels to have appeared in Arabic in recent years and its English version is a tour de force of translation. The book is an extraordinary exploration of the profound fragmentations and contradictions which mark the personality of the protagonist Mustafa Çorbaci, and by analogy the city and the society which he inhabits. Via a series of erratic (and on occasion, erotic) journeys through his Cairo, which is at once ancient and modern, he wrestles with the dilemmas of identity which beset this journalist, intellectual and aspiring artist. The solutions which are hinted at lie more within the rich variety and inclusiveness of Arabic culture rather than in any particular ideology.

"This text confronts the translator with extraordinary challenges. It mirrors the fundamental tension in the book between the heritage and modernity by constant reference to the classical literary tradition. The author chooses the pre-modern form of "epistles" or "treatises" for his rambling narrative, and the language of the text swings from the most formal classical Arabic to the most contemporary vernacular, along with extraordinary fusions of linguistic registers. Paul Starkey addresses these problems with great skill, and has produced a masterly English version of this riotous, chaotic and often comedic story, which is also deeply moving."

To buy a paperback or hardcover copy directly from Interlink Books in the US, click here


Paul Starkey commented:
"It is a great honour to be offered this prize – which, as with all translation prizes, I feel really belongs to the author and the text as much as to the translator. The book is not an ‘easy read', either in Arabic or in English, and with its complex, multi-layered themes and construction, translating it presented a huge challenge. But the novel is both timely and unique, and it deserves a wider audience. I very much hope that this award will help bring an exciting new novel to the attention of many new readers."

Interlink Books publisher Michel Moushabeck commented:
"I am thrilled to hear the news that Paul Starkey's translation of Youssef Rakha's brilliant novel The Book of the Sultan's Seal has won the 2015 Saif Ghobash Banipal Prize. For the past 30 years, Interlink has had an unwavering commitment to publishing the best of Arabic literature in translation. It is such an honour and a privilege for one of our translators to be recognized by the Prize, especially as it is the first time an Interlink title has won this prestigious award after having two runner-up titles. I've been singing the praises of Youssef Rakha's debut novel set in contemporary Egypt from the moment I read it in its original Arabic. It is fresh and compelling – Rakha writes like no other novelist I've read. And I could not be happier when Paul Starkey - in my view, one of the best translators from the Arabic working today – agreed to take on the challenging job of rendering The Book of the Sultan's Seal into English. I am pleased that his superb translation has received this well-deserved recognition and I hope that this award will bring Youssef Rakha's literary masterpiece to the attention of a larger western audience."

• Paul Starkey was Professor of Arabic and Head of the Arabic Department at Durham University, UK, until his retirement in 2012. He is a former Co-Director of the Centre for the Advanced Study of the Arab World, and is currently Vice-President of the British Society for Middle Eastern Studies. He has published widely in the field of modern Arabic literature, particularly Egyptian literature. He is the author of From the Ivory Tower: A Critical Study of Tawfiq Hakim (1987), and Modern Arabic Literature (2006), and with Julie Meisami was a co-editor of the Encyclopedia of Arabic Literature (1998). His book on the Egyptian author Sonallah Ibrahim will be published by Edinburgh University Press later in 2016.

He has translated a number of works by contemporary Arab authors including Dear Mr Kawabata by Rashid al-Daif (Quartet, 2000); Stones of Bobello by Edwar al-Kharrat (Saqi, 2005) for the European Cultural Foundation's publishing project Mémoires de la Méditerranée; Turki al-Hamad's Shumaisi (Saqi, 2005); Mansoura Ez-Eldin's Maryam's Maze (AUC Press, 2009); parts of Samuel Shimon's An Iraqi in Paris first published by Banipal magazine and Banipal Books; Mahdi Issa Saqr's East Winds, West Winds (AUC Press, 2010); and Adania Shibli's We Are All Equally Far From Love (Interlink, 2013). He has also published a large numbers of shorter translations and reviews in Banipal, of which he is a contributing editor. He is currently working on the translation of a Syrian novel, The Shell, by Mustafa Khalifa, to be published by Interlink later in 2016. 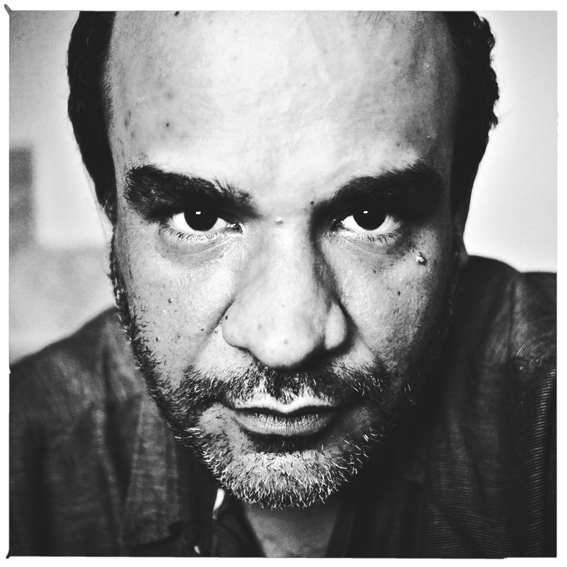 • Youssef Rakha is the author of the novels The Crocodiles and The Book of the Sultan's Seal. He is a bilingual writer and photographer, and the editor of the blog The Sultan's Seal (yrakha.com).

Born and based in Cairo, Egypt, he earned a BA in English and philosophy from Hull University, England.

He is the cultural editor of Al-Ahram Weekly, the Cairo-based English-language newspaper. 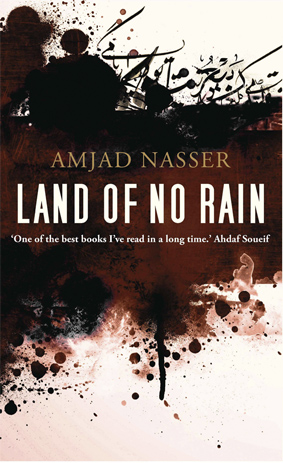 "An inspired and inspiring account of that perennial theme of the modern Arab experience: exile and return"

The judges were deeply impressed by Jonathan Wright's translation of Land of No Rain, an inspired and inspiring account of that perennial theme of modern Arab experience: exile and return. The narrative is that of the protagonist's return after twenty years in exile to a fictional Arab country where the body politic is dominated by a military dictatorship totally intent on the perpetuation of its repressive rule. Through its taut, succinct language, the reader is confronted by a succession of interlocking themes such as the workings of memory, the divided self of the narrator, and the manner in which individuals cope with threatening power in an atmosphere of constant imminent danger.

"The outstanding feature of this book is its highly poetically charged prose which Jonathan Wright has rendered into English with a sureness of stylistic touch which does complete justice to the Arabic original."

"I was delighted to hear that the judges decided to commend Amjad Nasser's book. The novel was one of the most subtle and intelligent literary works I've had the pleasure to translate. It is full of perceptive observations on the effects of exile on the individual and the impossibility of ever going home unchanged. It explores identity, change and the process of aging in innovative ways and simultaneously reflects the intellectual conflicts that dominated the Arab world in the late 20th century. Amjad writes with the economy and sensitivity of a poet to evoke a succession of cities across the Middle East and Europe over the past several decades. By placing the events in a nebulous allegorical framework he gives them a universal significance they might not otherwise have. I hope that the commendation encourages more people to read and enjoy Land of No Rain."

"We are very proud to work with such talented translators and writers as Jonathan Wright and Amjad Nasser. Providing access to literary works and authors from across the world through excellent translations is at the very heart of what we do at the press, and we are very proud that one of our titles has been honoured by the highly-esteemed Saif Ghobash Banipal Prize for Arabic Literary Translation." 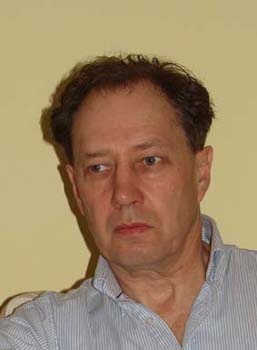 • Jonathan Wright studied Arabic, Turkish and Islamic History at St. John's College, Oxford University. Between 1980 and 2009 he worked for Reuters news agency mainly in the Middle East. His latest literary translations include Land of No Rain by Amjad Nasser (BQFP, 2014), commended for the 2015 Saif Ghobash Banipal Prize, and The Bamboo Stalk by Saud Alsanousi (BQFP, 2015), whose original Arabic edition won the 2013 International Prize for Arabic Fiction. He was joint winner of the 2013 Saif Ghobash Banipal Prize for his translation of the novel Azazeel by Youssef Ziedan (Atlantic Books, 2012), whose original Arabic edition won the 2009 IPAF, and in 2014 he won the Independent Foreign Fiction Prize for his translation The Iraqi Christ by Hassan Blasim (Comma Press, 2013). He was a judge of the 2014 Saif Ghobash Banipal Prize. 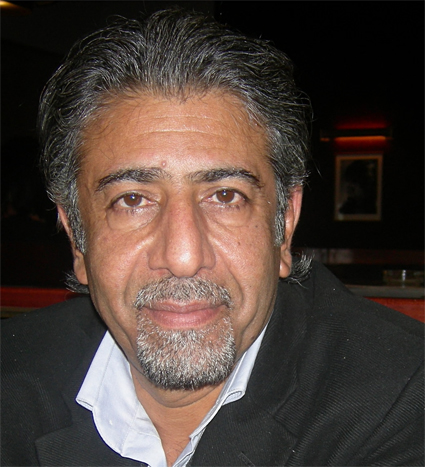 • Amjad Nasser was born in Jordan in 1955. He is a major contributor to today's Arab poetry scene and prior to his debut novel Land of No Rain, has published many volumes of poetry and four travel memoirs. He was managing editor and cultural editor of Al-Quds Al-Arabi daily newspaper for many years, and has judged a number of literary prizes, including the International Prize for Arabic Fiction.

His first volume of poetry in English translation was Shepherd of Solitude (translated by Khaled Mattawa and published by Banipal Books, 2009). He has won many prizes for his poetry and performed at festivals around the world. Selected poems have been translated into English, Spanish and French.

To read more about the prize and previous winners, click here